What in the world does that old truck have to do with preserving rare plants?

Watch your tone there. If it wasn’t for that old truck no one would have known that Browne’ s Savory (Clinopodium brownei) grew wild in South Carolina and I wouldn’t have been for sale in my nursery. Confused? Let me explain. 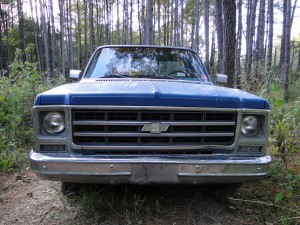 Growing and selling native plants has never been very lucrative. Therefore, I have never owned a new car..or even one from the same decade. From 2002-2008, this 1976 Silverado was my work truck. (Six years is my all-time record for having a vehicle).  By the time I get them, they are usually pretty close to death.)  This was the exception, eventually, I was able to buy a more fuel-efficient truck so I passed this one along to my brick mason friend, Paul Banner. …Anyway…It was also the truck I used to do most of  my field work for my Master’s Thesis at Clemson (A Survey of the Vascular Flora of Beaufort County, SC: Relicts and Remnants).

Although, the truck originally had AC, the original one had long quit functioning by the time I bought it. So, I used the 2-35 AC unit while doing summer field work.. (You know…roll down both windows and drive 35 mph. (That guy you yelled at and flipped off for poking down the road…that was me.) Anyway, I was driving across a recently mown field on one of the more than 2,000 island in our county when I was overwhelmed by a smell of pennyroyal. I stopped the truck and got out to pick through the clippings to see if I could find the source. This is what I found. . 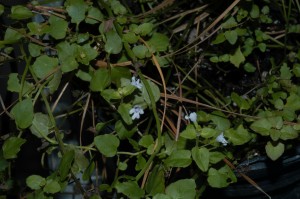 I had been looking for native and naturalized plants in Beaufort County since I came here in ’91. I had never seen anything like it before. I pressed some for my collection and I took some specimens to grow out. I looked  in every botanical text I had but I could not anything to match it. So I when I went to Clemson to continue my course work in the fall, I took the potted plants with me. I showed my “unofficial graduate advisor and major professor”, Patrick McMillan. He couldn’t identify it either. It is very rarely that Patrick cannot identify a plant. So, I pot my potted plants in the Clemson University greenhouse so that I could observe them as they grew. I checked every text in the Natural History Museum. I checked lots of pressed specimens in the Herbariusm. I went back from time to time to visit my friend. I never could figure out his name.

Then one day while examining duplicate specimens that John Nelson aka Plant Man” from University of South Carolina sent us, my heart almost stopped. I came across a specimen that he had collected in Georgia. It was the same thing that I had collected in SC. His description mentioned that the plant had “a  powerful aromatic mintiness”….or at leat that is what I remember.  I believe he had it labelled as Micromeria brownei or  Micromeria pilosiuscula. A search through Alan Weakley’s Flora of the Carolinas, Virginia and Georgia indicated that Micromeria was now Clinopodium. My mystery plant was now called Clinopodium brownei (Browne’s Savory).

The reason that neither Patrick nor I could identify the plant was that it had never been found in SC so it wasn’t included in the older texts. It was  not in Weakley’s key but it was included at the bottom of the section for the genus as a footnote. I had grown Clinopodium georgianum (Georgia Mint) for years in the nursery but it is a woody sub-shrub of dry areas. It was very different from C. brownei. So I had discounted it as an option.

Our Beaufort County population was more than 180 kilometers (111 miles) north  from the closest documented population in Duval County, Florida. It was more than 290 kilometers (180 miles) northeast from the closest documented population in Georgia (Thomas County). It is on the Georgia Special Concern List. It should be considered for the rare list in SC. All that and more was written in my thesis…..but we still lack any appartus to protect native species on private property in SC.

Now that I knew that my mystery plant wasn’t a new invasive exotic, I decided to propagate it in my nursery. I watched it to see how it grew and I experimented with it. I think it is a wonderul lawn substitute or lawn addition. It can be walked on and mown. It has completely evergreen and has no pests. Since it smells like pennyroyal, when fire ants invaded my kitchen last year, I rubbed branches wherever I saw them..and I through some in my compost for good measure. It works like a charm. It keeps them away for days. Like pennyroyal, it is medicinal but should be used with caution. The plant  doesn’t mind the pruning. If you are afraid of it spreading. It grows fine in a pot. Some people grow it in aquariums too.  Here is what it looks like when you give it a little love.

When you plant one in your garden, you can about helping to preserve a part of SC’s flora, that might have been extirpated if I hadn’t been driving that old pickup. 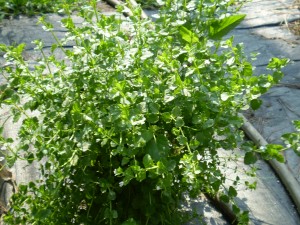