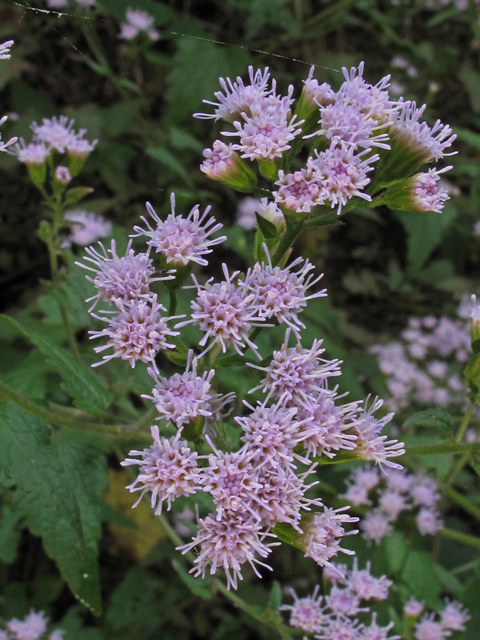 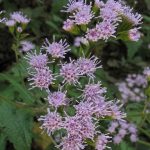 3 years ago I posted the following paragraph on my fb page.

After leaving work at Brays Island Plantation today, I realized that I had left my cellphone at my client’s house. I pulled over and walked back to the security gate and explained my predicament. The guard, graciously allowed me to go back to retrieve it. While walking back to my truck, I saw some charming pink flowers, that I had never seen before. I picked a branch so that I can identify it and make a voucher specimen. Having spent much time reading through the dichotomous keys of the Alan Weakley‘s flora, the name Fleischmannia incarnata (Pink Thoroughwort) came to mind. When I got home, I looked it up and confirmed it. I think, it would make a nice landscape plant. It is similiar to Ageratina and Conoclinium which are great nectar plants and deer resistant. I suspect it will be also. Plus, it is such a delicate shade of pink. I look forward to trying to propagate it so my clients and customers can try it out.

It worked. We were able to propagate Fleischmannia incarnata (Pink Thoroughwort) from that population. It makes me high just thinking about it. They are growing great and blooming like crazy now.  Butterflies and other pollinators love them. They thrive in full sun and part shade in soil that is either muddy or fairly dry.  I hear good things from my customers who planted them last year or earlier this year.  In the garden, where the deer killed the basil, the deer browse them just enough to make them bushier and flower more.   The stems are more numerous and much finer than than Its white look alike, Ageratina but they don’t spread across the garden and pop up in the middle of other plants like its blue look alike Conoclinium.  (we also sell Conoclinium and Ageratina. Each year, the clumps get a little bigger but they don’t spread into the middle of other plants.Click here if want to reserve some because they would be pretty in your garden. https://naturescapesofbeaufort.com/product/fleischmannia-incarnata-pink-thoroughwort/

When I checked my database,I found that I had vouchered Pink Thoroughwort, in the county once before, while conducting a natural resources survey with Francisco Javier Roblero Dominguez Roblero and Bill Hodgins for the Town of Bluffton in ’03.  (I didn’t recall it because, It wasn’t blooming when I found it. , Patrick McMillan, my plant guru and major professor, identified it for me.  In the 2004 edition of his flora, Alan Weakley   reports it as rare in Va, NC, SC and GA. In his 2015, edition clarifies that it has a very broad but highly fragmented population.  The SC Plant Atlas (where it is called Eupatorium incarnatum) shows that it mainly occurs in the Piedmont and Mountains, but I  found both of these population less than a mile from salt water.You can expect our plants to be much more heat tolerant than typical for this species. It is not reported for Beaufort or its adjacent counties. ( Note to self: Contact John Nelson so that he will put a dot for Beaufort on that map.  Click here to reserve some for your garden

Any questions? or comments?